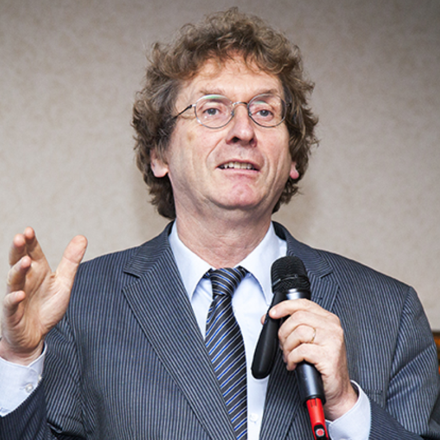 Braungart studied Chemistry and Process Engineering, among others at Konstanz, Darmstadt, Hannover, and Zurich Universities. In the 1980s, he dedicated his work to the environmental organization Greenpeace and beginning in 1982 helped to establish the chemistry section of Greenpeace International, which he took over in 1985. In the same year he received his Ph.D. from the University of Hannover’s chemistry department. In order to develop solutions for complex environmental problems, EPEA was established by Greenpeace in 1987. Ever since, Braungart has been involved with research and consultancy for eco-effective products i.e. products and production processes in a loop, not only harmless to man or nature, but beneficial.

Braungart is co-author with William McDonough of the “Hannover Principles of Design: Design for Sustainability”, which served as development guidelines for the World’s Fair in Hannover in 2000. In 2002, he also co-authored “Cradle to Cradle: Remaking the Way We Make Things”, with William McDonough which was translated into numerous languages. Building on that, “The Next Industrial Revolution: The Cradle-to-Cradle-Community” was published in 2008. For his scientific achievements Michael Braungart has received a number of awards. Between 1989 and 1991, he developed the Cradle to Cradle® concept under the name “Intelligent Products System” (IPS) in the context of a research-project by the former Swiss chemical company Ciba-Geigy. At the moment, Braungart’s work focuses on his professorship in Lüneburg.